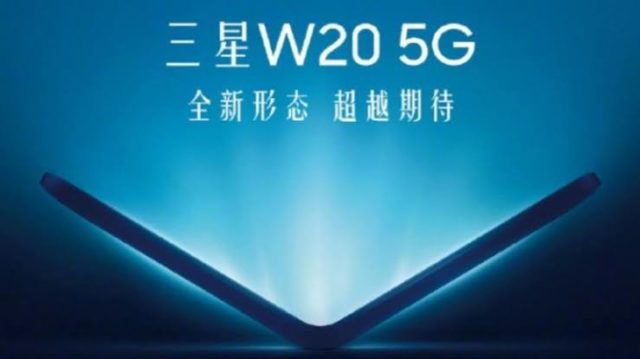 Samsung is all set to launch its second foldable smartphone. The Samsung W20 5G launch has been rumoured for a while and we recently saw a teaser posted that confirmed its unveiling in November. A new poster now reveals the W20 5G foldable will launch in China on November 19. The poster also reveals that the W20 5G will not be a flip phone as previously speculated, but will look a lot like the Galaxy Fold instead.

A new poster image of the Samsung W20 5G shows the phone standing vertically and opening up like a book. We also see a vertical camera setup on the back and a side-mounted fingerprint sensor just below the volume and power buttons. All of this looks very similar to the Galaxy Fold design, which leads us to believe that the W20 5G is a 5G variant of the Galaxy Fold for the Chinese market.

It was previously rumoured that Samsung W20 5G would offer a foldable display in a clamshell design as it was speculated to be the successor to the W2019 flip phone. However, the latest teaser suggests that won’t be the case. Additionally, a wireless certification shows a version of the Galaxy Fold comes with model number SM-W2020, which likely refers to the W20 5G.

Samsung will announce the W20 5G in China on November 19, which is when we will know its exact specifications and just how similar it is to the Galaxy Fold. As a 5G smartphone, you can expect the W20 5G to cost a little higher than the already expensive Galaxy Fold.Read More..