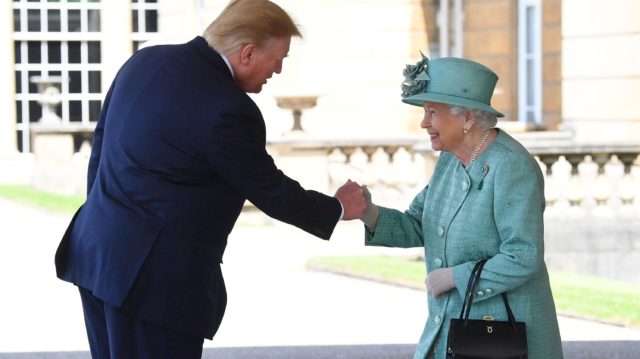 The Trumps’ visit to the Abbey also included a solemn laying of a wreath at the Tomb of the Unknown Warrior, first interred in 1920 in the central aisle of the Abbey.

The presidential couple were accompanied by Prince Andrew, Duke of York, second son of Queen Elizabeth II; he will be their main escort during three days of hobnobbing with the royals during the state visit, only the third offered to an American president by the queen during her 67 years on the throne.

Next, the Trumps arrived to take tea with Prince Charles and his wife, Camilla Duchess of Cornwall, at Clarence House, the Prince of Wales’s London home. In the evening, the Trumps and their entourage, including his four adult children, will be treated to a white-tie-and-tiaras state banquet back at Buckingham Palace.

The Trumps arrived at Buckingham Palace Monday just after noon, local time, to meet Queen Elizabeth and be treated to the kind of royal pomp-and-ceremony the president loves receiving and the British love staging.

Kicking off Monday’s visit, the Trumps arrived by helicopter, which touched down in the gardens of the palace.

The queen greeted President Trump after he ascended the palace stairs with Prince Charles at the West Terrace of Buckingham Palace. Melania walked behind with Duchess Camilla. The queen wore a big smile as she greeted the president with a handshake, wearing a mint suit and matching hat. She then acknowledged Melania, and the three royals walked inside with the president and first lady.

For the occasion, Trump wore a navy suit with a bright periwinkle blue tie. His wife twinned with the duchess – both wore white. Melania Trump wore a Dolce & Gabbana knee-length skirt suit with a contrasting navy collar, belt and shoes that coordinated with her wide-brimmed boater-style hat by one of her favorite designers, Herve Pierre, according to her spokeswoman, Stephanie Grisham.