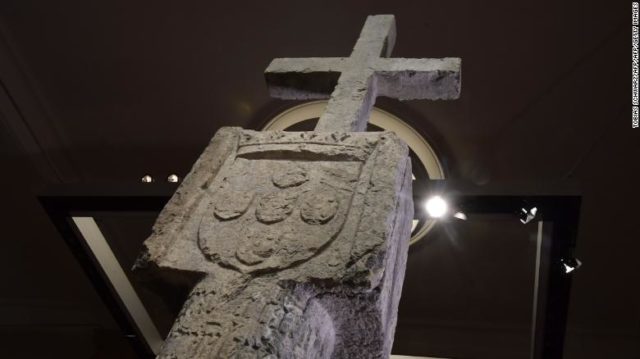 Germany is set to return a 15th Century artifact it took from Namibia known as the Stone Cross.

Minister of State for Media and Culture Monica Gruetters on Friday said the gesture showed that Germany was committed to accounting for its colonial past.
“A clear signal that we are committed to reappraising the colonial past,” Gruetters said at a press conference announcing the restitution in Berlin.
The 3.5-meter high navigation landmark, erected by Portuguese explorer Diogo Cão, was first placed on Namibia’s coast in 1498.
It was taken to Germany in 1893 after the area became a German imperial protectorate and is on display at the German Historical Museum in Berlin.
The Stone Cross, which bears the Portuguese coat of arms, was featured on old world maps, the museum said.
In June 2017, the Namibian government formally requested its return.
Gruetters will travel with German Historical Museum President Raphael Gross to Namibia to hand over the monument in August, the German culture ministry said on Friday.
Gross at a symposium in 2018 said the Stone Cross could spark discussions about Germany’s history of colonial rule and about restitution and the return of colonial artifacts.
Faced with mounting pressure from African governments, more European countries are working to return artifacts plundered from Africa during colonial times.
France President Emmanuel Macron last year ordered the return of 26 artworks to the Republic of Benin more than a century after they were removed from the West African nation.
Readmore…