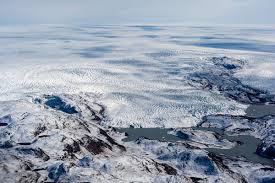 Scientists have discovered 56 previously uncharted subglacial lakes beneath the Greenland Ice Sheet bringing the total known number of lakes to 60.

Although these lakes are typically smaller than similar lakes in Antarctica, their discovery demonstrates that lakes beneath the Greenland Ice Sheet are much more common than previously thought.

The Greenland Ice Sheet covers an area approximately seven times the size of the UK, is in places more than three kilometres thick and currently plays an important role in rising global sea levels.

What are subglacial lakes?

Subglacial lakes are bodies of water that form beneath ice masses. Meltwater is derived from the pressure of the thick overlying ice, heat generated by the flow of the ice, geothermal heat retained in the Earth, or water on the surface of the ice that drains to the bed. This water can become trapped in depressions or due to variations in ice thickness.

Knowledge of these new lakes helps form a much fuller picture of where water occurs and how it drains under the ice sheet, which influences how the ice sheet will likely respond dynamically to rising temperatures.