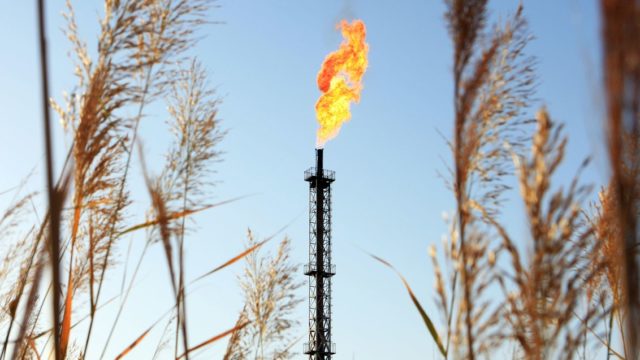 This story originally appeared on Undark and is part of the Climate Desk collaboration.

Every week dozens of metal flasks arrive at NOAA’s Earth System Research Laboratory in Boulder, Colorado, each one loaded with air from a distant corner of the world. Research chemist Ed Dlugokencky and his colleagues in the Global Monitoring Division catalog the canisters and then use a series of high-precision tools—a gas chromatograph, a flame ionization detector, sophisticated software—to measure how much carbon dioxide, nitrous oxide, and methane each flask contains.

These air samples—collected at observatories in Hawaii, Alaska, American Samoa, and Antarctica, and from tall towers, small aircraft, and volunteers on every continent—have been coming to Boulder for more than four decades, as part of one of the world’s longest-running greenhouse gas monitoring programs. The air in the flasks shows that the concentration of methane in the atmosphere had been steadily rising since 1983, before leveling off around 2000. “And then, boom, look at how it changes here,” Dlugokencky says, pointing at a graph on his computer screen. “This is really an abrupt change in the global methane budget, starting around 2007.”

The amount of methane in the atmosphere has been increasing ever since. And nobody really knows why. What’s more, no one saw it coming. Methane levels have been climbing more steeply than climate experts anticipated, to a degree “so unexpected that it was not considered in pathway models preparatory to the Paris Agreement,” as Dlugokencky and several coauthors noted in a recently published paper.

As the years plod on and the methane piles up, solving this mystery has taken on increasing urgency. Over a 20-year time frame, methane traps 86 times as much heat in the atmosphere as carbon dioxide. It is responsible for about a quarter of total atmospheric warming to date. And while the steady increases in atmospheric carbon dioxide and nitrous oxide are deeply worrying, they are at least conforming to scientists’ expectations. Methane is not. Methane—arguably humanity’s earliest signature on the climate—is the wild card.

Humans have been producing methane for thousands of years, by clearing land with fires, raising cattle, and growing rice. Thanks to air bubbles trapped in ice cores taken from Antarctica, we know that the global average methane concentration in the atmosphere has nearly tripled in response. Because it lasts only about a decade in the atmosphere, cutting methane is a relatively fast-acting lever for slowing climate change. But it isn’t clear how we should pull that lever.

Scientists continue to offer competing hypotheses to explain the global uptick, and there is no shortage of potential suspects. “The really fascinating thing about methane,” says Lori Bruhwiler, a NOAA research scientist, “is the fact that almost everything we humans do has an effect on the methane budget, from producing food to producing fuel to disposing of waste.”