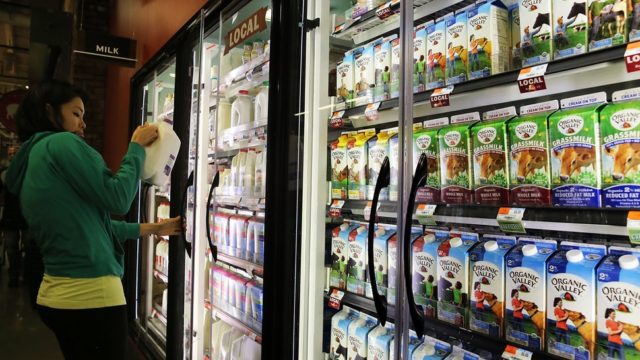 The Food and Drug Administration is going after food waste with a new effort to make sure we don’t throw out groceries until they’re absolutely inedible.

On Thursday, the agency issued a letter to the food industry at large, throwing its support behind a growing trend to almost universally adopt a “Best if Used By” date label on products. At the same time, it’s also reminding the public that most foods can still be perfectly safe to eat if they’re past the marked date, even if they’re not necessarily quite as tasty anymore. The moves are part of a larger effort by the FDA to drastically cut down on America’s food waste problem.

“Imagine this: You go to your favorite supermarket and come out with three bags full of groceries. Before you get in your car, you toss one of those bags in the garbage. Sound ridiculous? Of course it does, but that’s in essence what food waste looks like every day across our country,” said Frank Yiannas, the FDA’s Deputy Commissioner for Food Policy and Response, in a statement released Thursday as part of the FDA’s consumer update.

According to the U.S. Department of Agriculture, some 30 percent of Americans’ food ultimately goes to waste on store shelves or in people’s homes, amounting to roughly $161 billion lost annually. A major reason why the average person throws out their food, according to research cited by the FDA, is confusion over what exactly the different date labels they encounter really mean.

The FDA and USDA (the agencies responsible for regulating our food) actually don’t mandate the use of a date label on most foods; companies do it at their own behest. They also don’t need to run the language used in these labels by the FDA for approval, or even explain how they determine their dates. That’s led to a wide variety of date labels on foods, such as “sell by,” “expires on,” or “use by.”

The problem is that, while people tend to assume they’re looking at a product’s expiration date, the labels are just supposed to convey the quality and freshness of the food, not whether it’s safe to eat. Even by that standard, the date is a rough guess, so many foods will stay fresh past the predicted day.

In recent years, though, the food industry has tried to clear up this confusion. In 2017, the Grocery Manufacturers Association and Food Marketing Institute formed an alliance to recommend that its member companies adopt the “Best if Used By” label for all non-perishable foods, and the “Use By” labels for spoilable foods. Only foods with the “Use By” label, they added, would have an expiration date as typically understood, meaning foods eaten past that date could be unsafe.

In its letter to the industry, the FDA states it “strongly supports” the widespread use of the “Best if Used By” label for all appropriate foods. The FDA’s strong suggestion mirrors that of the USDA, which regulates mainly animal products like meat and eggs.

“We expect that over time, the number of various date labels will be reduced as industry aligns on this ‘Best if Used By’ terminology,” said Yiannas. “This change is already being adopted by many food producers.”

The major exception to this rule, though, is some kinds of baby food. The FDA has long mandated that a “Use By” label is tacked onto all infant formula products, which is meant to guarantee the quality as well as the safety of the product. Interestingly enough, the agency isn’t weighing in on whether the industry’s growing reliance of the “Use By” label for perishable foods that aren’t infant formula is worth adopting widely, at least not right now.