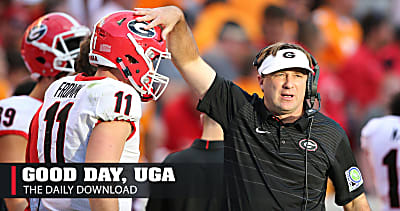 Kirby Smart has made his feelings on the transfer portal pretty clear to this point. He’s not a fan of it and he’s said that it isn’t what’s best for the players or the game of college football.

Smart has reiterated that point again and again over the course of the past seven months since it came into existence. No school has had perhaps a more high-profile situation than Georgia when freshman quarterback Justin Fields entered the transfer portal following Georgia’s loss in the SEC championship game.

Fields was the No. 2 overall player in the 2019 recruiting cycle. But while Fields flashed some of his incredible talents as a freshman, he was never able to beat Jake Fromm for the starting spot. Fields announced that he would be transferring to Ohio State in early January and was granted a waiver shortly after to play during the 2019 season.

But unlike linebacker or on the offensive line, only one quarterback can play at a time. Which is a part of the reason Fields ended up transferring.

“We want to recruit and develop guys. However, the portal has kind of changed things,” Day said. “We thought Justin [Fields] was a fit for a lot of reasons.

“When Dwayne Haskins leaves as a sophomore, we think he has three years left, and he comes for one and throws 50 TD passes. We kind of had to figure all that out in short order. When Justin became available, it made sense.”

Smart spoke with Dodd as part of a deeper dive into the transfer portal. The Georgia coach gave some more nuanced takes on why the portal has become such a popular option for players and why it’s a problem.

“[The transfer issue is], ‘Where are you going to go to get developed the best?’ But that’s not the society we live in. We live in the, ‘Me, now, I want mine now. I want to go play right now.’”